This is the second beta of the Bubba web admin running on Sakaki's Gentoo-on-B3. If you are running Gentoo based on the latest live USB release (1.8.0) you can install this by running the following command:

prerequisites Please make sure to bring your repositories up to date, so you get the most recent version. If you do not have the bubba repo in your current Gentoo install you can load it from layman. 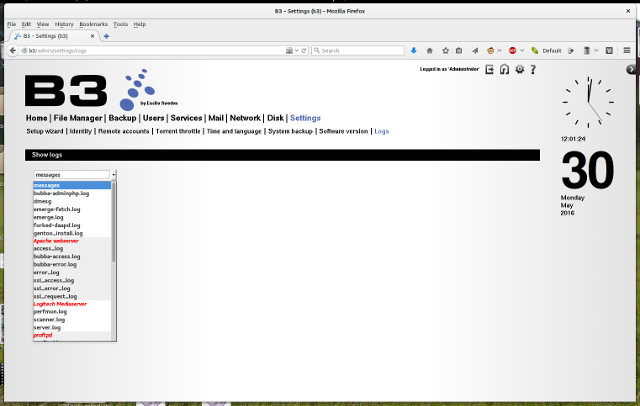 Looks great! I'll include this emerged with the next live-USB release.
Any plans for an Arch variant? (I think it'd be quite popular!)

No Arch. I'm sticking with Gentoo as I'm familiar with that and it keeps me off the troublesome path of needing to figure out yet another organization structure. I guess though that the patches provided within the ebuilds could hint others to identify where changes should be applied.

Do note that this is still a (very early) beta. Some functions such as adding and deleting users work, others don't or allow you to do stuff that could be harmful to the installation. For instance, in the disk information view shown above, the USB disk is my /boot partition and I really need to add some logic to protect it. At present I can also not test the firewall settings, because this requires the network editor to function first (settings are blocked).

I also fixed the sysvinit ebuild. As part of one of my tests I had disabled the write-magic patch and forgot to turn it back on when pushing it to github.
Top

Sanitized handling of "null" configured NICs (i.e. NICs that do need to be initialized because they are part of a bridge or a PPPoE connection but should not receive address for themselves). The web UI will now display these as having address 0.0.0.0 rather than "automatic" and you can also set a NIC to "null" configuration by setting this address in the web UI

Fixed incorrect display of firewall settings due to missing paths

Fixed some issues with conf files: bubbacfg and apache vhost

Fixed a dependency issue when building the B3 frontend using binary packages. (Thx for the feedback, Sakaki)

Added HDD temperature to the stat page, which I only discovered to be missing today because it was originally added as an optional element and thus did not throw any error or display invalid data.

Fixed issue with latest release of timezone-data (2015e) dropping the part of the database that was referenced by bubba-backend.

New ebuild for Domoticz, which changed its source repository from subversion to git

Also started to add ~ppc keyword to packages, figuring there should be no reason for these packages not to be able to run on a B2 as well.

Fixed the wireless settings being blocked by interfaces not hardcoded in bubba-networkmanager. Wireless interface still must be named according to the old standards (i.e. wlan0)

Fixed another issue with the transfer to netlink 3, causing the channel listing to be empty. Do note that if you select 5Ghz band the channel listing is probably still empty. This is because these channels are blocked by a regulatory domain setting in the onboard eeprom ("passive_scanning" set to "true").

Log file listing is now dynamically determined. Added some color scheming to the list as well, so it gets easier to identify what service a log file belongs to.

Fixed an issue with PHP 5.6 and HTTP_RAW_POST_DATA

Fixed an issue with the delete user routine - you can't delete a samba user if you already deleted the unix user.

Fixed the problem with the obsolete bubba-igd service

Added a gpio aware version of the identify_box script (callable through http://b3/admin/ajax_settings/identify) that will make your B3 beep and rotate the front led color in a red-green-blue sequence for 20 seconds. A bit of a gimmick, but handy if you have a couple of B3's lined up and don't really know which one is which. Like the original script it is python based and it takes a while before the sequence actually starts: ~15 seconds the last time I counted.

Firewall settings are now working as well.
Do note a small change from the original scripts though. The web interface no longer manipulates the INPUT, FORWARD and *ROUTING chains directly, but user defined chains Bubba_IN, Bubba_FWD, Bubba_DNAT and Bubba_SNAT that need to be defined and linked.

WAN and LAN network pages are now also functional, including a fix not to show DHCP leases if the DHCP server is not enabled. I should probably hide that whole section of the page in this case, but that's something I'll worry about later.
Top

Thank you so much.

When i first started out, i didn't knew that you made buildkernel-b3, oh my - things seem much easier now

I've installed on a internal disk, but the web interface is not working, /opt/bubba is missing, could it be that it was only working on the usb ? Never mind ill try emerge -av bubba
Top

The install method is merely a simple copy of folders that are on the live USB. I do suspect though that Sakaki did not include /opt in the howto install description. If you do have the Gentoo Live SE USB it should be sufficient to copy the /opt content to the internal disk. Installing the bubba package won't work as the install database will tell it is a reinstall and "think" that all the dependencies are there already as well.
Top

Ok, thanks, I've reinstalled the disk.

I've scanned the threads about easyfind.pl

Is it still only possible to use easyfind service if you install the web interface, or can it be done by commandline ?

You can use it from commandline and it can use your original easyfind config. Do note that the paths differ from the original Squeeze based operating system though.

PS: found a little bug just now in the web interface, so this is at present the only way to control easyfind.
Top

can you help me out with this conflict ?

Ive tried updating and removing, nothing helps me. Catch 22

The easyfind service is a bit strange. I Will try to update the client scripts.

I verified those issues and can't replicate the JSON / JSON-XS conflict. The version of JSON should however be 2.900.0 to match the selected version of JSON-XS and the cause may be a missing keyword in your portage files. I'll correct this in the next version by enforcing a minimal version, which should prompt you with a request to automatically add the missing keyword.

Did find an issue with easyfind. Turns out this is caused by the newer JSON::XS that no longer translates boolean values into literal "false" or "true" strings. As a result the easyfind script interprets a correct response from the easyfind server as an error state. While annoying, the problem is restricted to updating the easyfind config file. The service itself does function correctly.
Top

Corrected faulty error trapping in easyfind due to upgraded json libraries (false ≠ "false")
Fixed path issues and changed domain names (still had a reference towards mybubba.org) causing easyfind not to function from the web administrator
Fixed compile error due to incorrect concatenating of flags in libbubba-info (no version bump, therefore new installs only)
Dependency issue with Perl JSON libraries should now be solved as well

I'll try it when i get home.

I'm now able to use the setname command. It works.

Changing hostname did not persist in between reboots. Fixed code to alter existing hosts file rather than overwrite with default entries and added ServerName directive to apache vhost definition.

Fixed problem with missing Listen directive when DEFAULT_VHOST is not defined.

Sanitized patch files with an added comment section on top

Edited the "software update" page to become a "version info" page. This release will not have support for updating or installing software through the web UI. The detailed information on the version info page is now expanded by default and displays the current running kernel version for "bubba3-kernel". Bubba-album is replaced by singapore.

Added "bubba" portage set. To install a full bubba system all you need to do now is run

Managing fetchmail accounts would not work because of incorrect rights on the resource file.
Also, the services page could not positively identify if fetchmail was running.

Both these issues have been addressed

Fixed wlanupdate page always timing out. The only time out that is still occurring is when wifi is switched on or off. This is unavoidable and will thus remain.

Fixed hosts file corruption while switching wifi on and off through the web admin
Changed the version number on the optional sysvinit package to reflect its actual version rather than wrongfully identify as a rolling release.

Finally managed to get this running. Switching wifi on and off through the web administrator changes your lan interface to either eth1 or br0. This is now functional and will show the correct data in the lan network view with either selection.

Do note that when running Sakaki's 1.7.0 version the lan interface defaults to the bridge interface br0 with eth1 as the single member. If you own a Wifi version B3 you can simply fix the networking parameters by switching wifi off and back on in the web administrator. For non-wifi versions this currently still requires some manual editing of conf files.
Top

I'm closing this thread as I'm entering the stage of Release Candidate.

There is some final stuff to do, but all controls that I can verify behave like in the original Squeeze based system. There's just the matter of a few config files whose content is not actually controlled by the web UI or its tools, but are expected to have a certain content. Like Samba shares, email folders and settings to use by Postfix and Dovecot. I'm currently evaluating how to handle this best.
Top
Post Reply
15 posts • Page 1 of 1